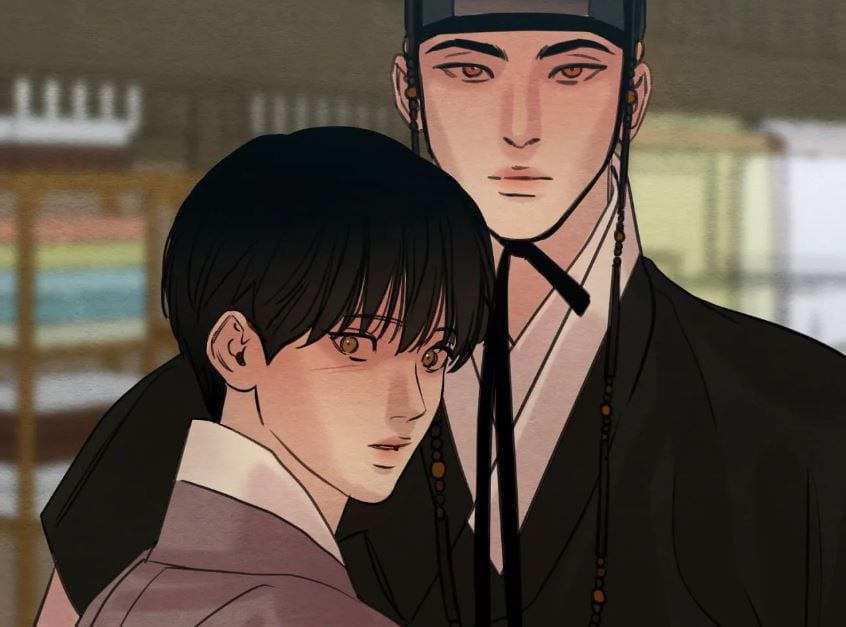 The Rise in Queer/BL Adult Webtoons in Korea

Queer/BL (Boy Love) adult webtoons are surprisingly very popular in Korea. What might be even more surprising is that straight Korean females are the main readers. In addition, there are many queer webtoon authors that are female. Most queer adult webtoons focus on homophobia or discrimination of queer people in Korea. These forms of homophobia come from family, friends, or coworkers. Therefore these queer webtoons offer more serious content that is also educational. Therefore many queer/BL webtoons have overwhelming fan support. Many fans have expressed that queer/BL webtoons helped them understand sexual minorities and overcome their prejudices. You will find a few queer/BL webtoons on the list and we recommend you give them a try.

Painter of the Night

One of the most popular adult webtoons out of Korea, Painter of the Night is the biggest title on Lezhin Comics right now. The story follows a talented young painter, Na-kyum, in feudal Korea. He is very shy, yet determined with a big heart. Once renowned for his erotic male paintings, Na-kyum has since quit painting. That is until a young nobleman named Seungho comes into his life and demands more paintings. For which he is more than happy to pay and model for. The art style of this webtoon is what sets it apart from the others. In addition, the character of Seungho is one of the more in-depth characters around. He loves power and sex and it is difficult as a reader to cheer for him or hate him.

The art style is very unique and the expressions on the characters and the coloring of the webtoon really separate it from the rest. It is a great representation of lust and love in historical times while also showing the social power structures and value systems of people in Korea during that time.

Dong-gyun spends his days in class and his nights behind a locked door watching his favorite cam boy streamer, BJ Alex. Alex is a very shady character who takes advantage of Dong-gyun sexually. Alex uses his celebrity power to control Dong-gyun who obeys Alex’s commands. Soon the balance of power shifts as Alex starts to develop strong feelings for Dong-gyun. What started off as purely a physical relationship (sex partners) has the potential to develop into something more.

Once you understand the character’s backstories, the webtoon is very easy to get into. While many feel the story is too predictable, the characters are what many readers like about BJ Alex. The characters are always exciting and really go into detail about how the characters went from a purely physical relationship to something more.

A Man of Virtue

A Man of Virtue is about Nam Jinwoo. He spends his whole life coming in second place at everything. From school competitions all the way to his work life, Ma Sangtae has always been able to run faster, be smarter, and take the initiative. Basically, Jinwoo hates Sangtae. He has been living in the shadow of Ma Sangtae, his whole life. It started off in High School, then on to College, and now at the office. And as we all know in these comics, hate turns to lust. The lust takes a turn when Jinwoo finds himself cursed with the dirtiest, most erotic fantasies of Sangtae. These fantasies are something he can’t control because they are not his fantasies, but he is convinced they’re Sangtae’s fantasies.

Those looking for a bit of humor in their adult webtoon, A Man of Virtue is for you. It is a lot of fun and cute while still having that NSFW graphics. The first 5 chapters of this Manhwa are free on Lezhin and for those that pay for the whole thing, I can promise a lot of really touching moments about relationships, adulthood, and most of all coming to terms with your sexuality.

Talk to Me is about Raeyim who has it all. She’s beautiful, smart, classy, and has a wonderful boyfriend. And it’s not by accident, no. It’s by careful design and management of her reputation. No one would suspect she spends her nights watching porn and wanting something more… from sex. I mean, her boyfriend’s fine and all, but she doesn’t want him to ask if he should go down on her. Everyone considers Raeyim to be the purest girl to ever walk the earth. This adult webtoon is cute, fun, and most of all sexy. You will get a deeper insight into a woman’s mind and see female sexuality and their desires/lust openly and without reservations.

Love is an Illusion

Ask any fan and they’ll tell you, the Omegaverse is weird. As Lezhin Comics’ first English language foray into the genre it’s… intense. Hye-sung has spent his entire life convinced he’s an Alpha, the top of the food chain. But everything goes sideways when he realizes he’s actually an Omega! After this revelation, he continuously crosses paths with Dojin, an Alpha who can’t stand Omegas. In addition, in the Omegaverse, Omegas can give birth. That’s right guys can get pregnant.

The art here is in color and amazing. Then you add in the roller coaster of emotions you will feel for the characters and you have one great adult webtoon. Many might be turned off by the almost non-consensual sex scenes but the second volume of the book is even better than the first.

From the acclaimed author and artist of An Easy Target comes Love Shuttle. Doyun is tall, handsome, and absolutely beautiful. Everyone assumes he’s an Alpha, but he’s actually an Omega; he’s just never gone into “heat” before. He is considered a late bloomer and his body is ready to bloom all he has is his work rival, Taehan. Taehan is more than happy to take advantage of the situation and offer his *ahem* “help.” Taehan is a more likable Alpha than most traditional Alphas and is the most interesting character in the series.

This is one of the few omegaverse webtoons that does not contain an abusive relationship. While the artwork is not the best, the story has a lot of comedy to it while also being steamy.

Adult webtoon An Innocent Sin is about Nayeon, who is on the last train home when she finds herself alone on the train. What’s a girl to do? She takes a minute to “enjoy” herself until she realizes there’s actually a man on the train! Calmly, he approaches her and offers his business card… “Peach Puff?” Slowly, Nayeon embarks on a path to discovering her own sexuality and everything it can entail.

The story can get a bit depressing and is suited for mature readers only. This is the Manhwa version of Fifty Shades of Grey.

A few things to know about Cafe Goyo: first, their coffee sucks. Second, never order off the menu. And third, the manager, Yohan, is deaf. So when Soohwa starts as a part-timer, he’s not expected to make good coffee. Instead, he’s expected to learn more sign language beyond “higher,” “pay” and “please.” But when Yohan offers to give him private lessons, Soohwa is reluctant. Not because he doesn’t want to study, but because he has a “hard” time around Yohan. Like, literally. He gets hard. Whenever he hears Yohan’s deep, sexy voice. The webtoon overall offers a wide range of cute characters with lots of fluffy sex. The story is limited but those that enjoy a little comedy in their smut will enjoy Sign.

This adult webtoon is loaded with sex and the story does not really pick up until the later volumes. The characters lack personality and there is almost no development. However, those that like saucy sex scenes will love Sign because every update would just be a sex scene with no story.

Koogi’s dark epic came to a close in 2019 bringing closure to a story that’s had readers gripped for 3 intense years. Killing Stalking is a graphic adult webtoon about Yoon Bum who is a quiet and intensely scrawny boy with a crush on Sangwoo, one of the most popular guys at school. Yoon Bum doesn’t want Sangwoo to know of his profile creeping, for fear of being labeled a stalker. His obsession peaks when he breaks into Sangwoo’s home. He makes his way to the basement where his dreams of Sangwoo are broken into something darker. And bloody. The webtoon does not offer a positive portrayal of homosexuality. Yoon Bum is seen as an obsessive stalker who spends a vast majority of his time trying to break into the home of a man he doesn’t even know, yet loves.

This is for sure only for mature readers as it deals with rape, abuse, and Stockholm syndrome. It is by far the darkest, most disturbing/depressing webtoon around and shows just how well the author was able to convey these emotions through the art and a captivating story.

Love or Hate is a mature adult webtoon about Haesoo, who is the cynical writer of a romance column, while Joowon, his former stepbrother, is a famous actor. The two go way back – thrust together when their parents remarried, their relationship is far from simple. Brothers? Friends with benefits? Soulmates? Or nothing at all? Theirs is a delicate balance between lust and loathing, dating and breaking up, irritation and infatuation. When the mysterious photographer “K” takes an interest in Haesoo, events begin to spiral out of control. As the lines between art and reality become increasingly blurred, what direction will this story take? Cheap romance? Sensual erotica? Or something much more twisted?

For those that love a juicy love triangle storyline, Love or Hate is for you. The main character is very complex and the relationships in this are real and hardcore. 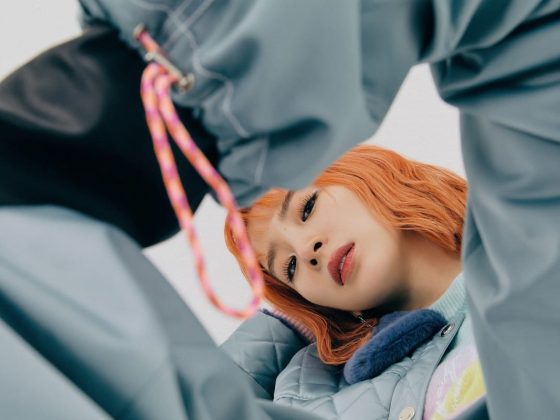 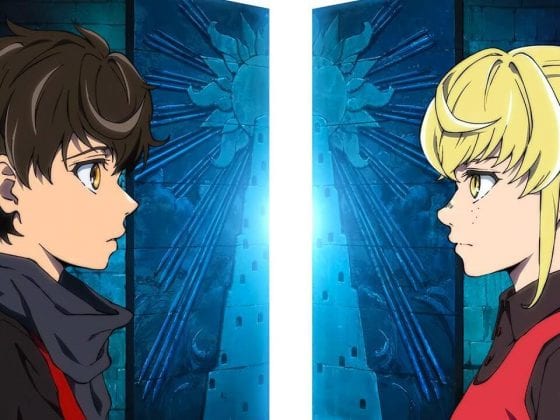