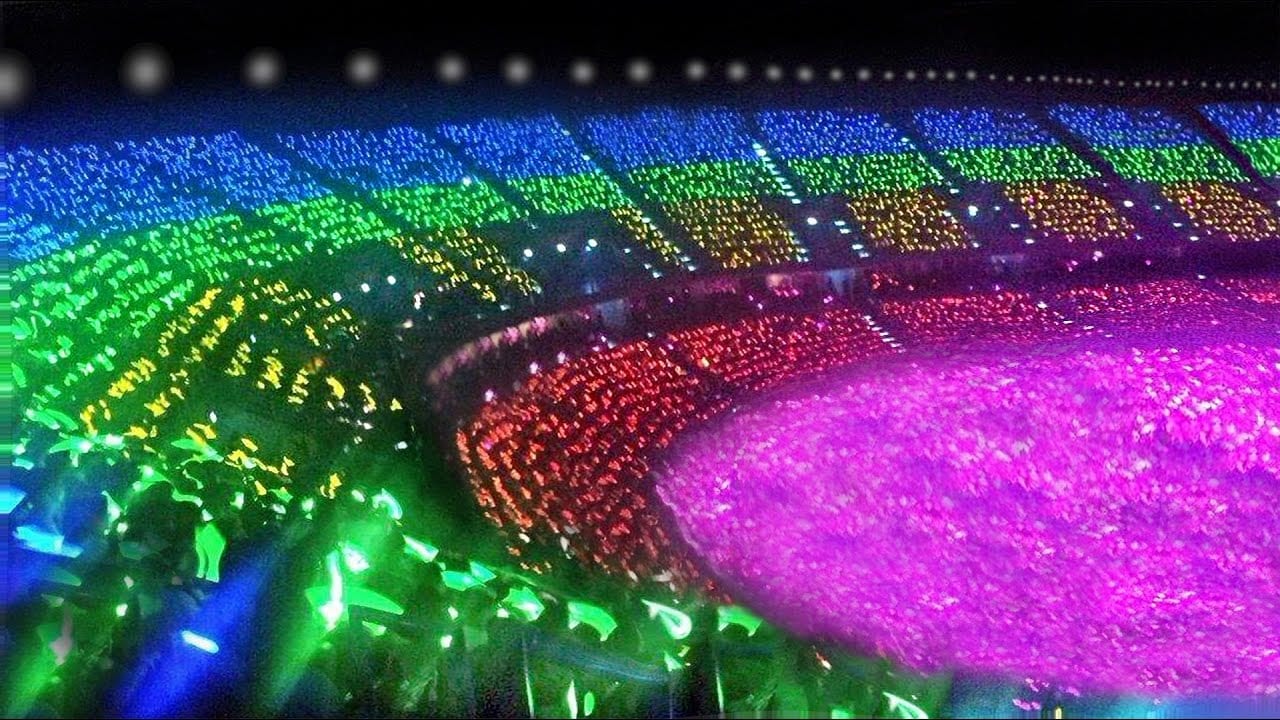 If you have been to a Kpop concert in the past, you will see a stadium lit up with fans holding up their lightsticks. Lightsticks are a must for Kpop fandoms and essential to any Kpop concert-going experience. Groups incorporate fan participation using the lightsticks at the concerts. Therefore if you don’t have one, good luck in trying to participate. Some of the best Kpop lightsticks have been upgraded from older models and now offer much more than LED lights. Some have BlueTooth capability and ultra-cool designs, and the group members have designed some. Many have become collector’s items, and it is difficult to find them online because they sell out quickly. 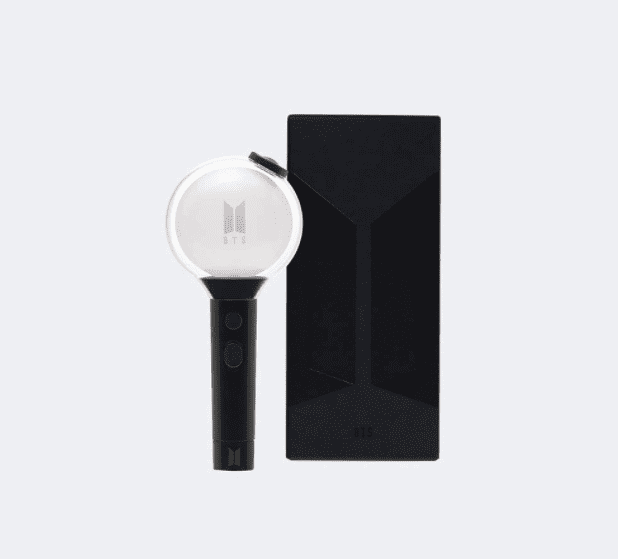 The 3rd version of the BTS lightstick (Army Bomb) was released in mid-2018 and, to date, has been the most popular kpop lightstick sold. It can be controlled by an app and BlueTooth connection at BTS concerts. The lightstick is rechargeable and has a strap to take it wherever you go. It has three modes: light-up, vibration, and reactive sound. My favorite feature is the sound reactive mode because it syncs up with the music and creates an incredible visual effect.

This version of the Army  Bomb looks very similar to their previous versions, apart from a few minor details. It comes with photo cards as well as an official merch tag. To ensure this is an official BTS lightstick, ensure it has the official merch tag and the “Made in Korea, Big Hit Entertainment” tag. 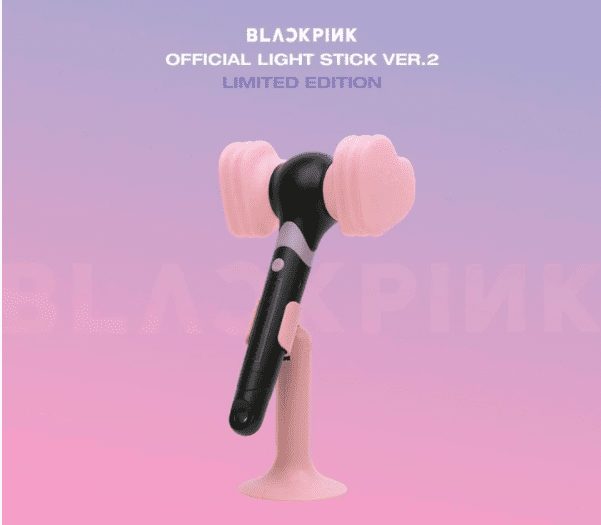 BLACKPINK’s official lightstick has been one of the best Kpop lightsticks for some time now. It was first teased by YG Entertainment’s CEO’s Instagram in mid-2018. What makes this lightstick unique is that all four members designed it. The lightstick is shaped like a hammer, and the heart shapes squeak when making an impact. However, this feature can be turned off.

In addition, the lightstick features a sleek black and pink design and comes with a strap for easy carrying. The lightstick also has several modes, including a sound-activated way that syncs up with the music. Best of all, the lightstick is rechargeable, so you don’t have to worry about batteries.

Make sure it comes with a YG tag that looks like a QR code on the back of the box. You can scan it using the YG SELECT app to ensure it is an authentic product. 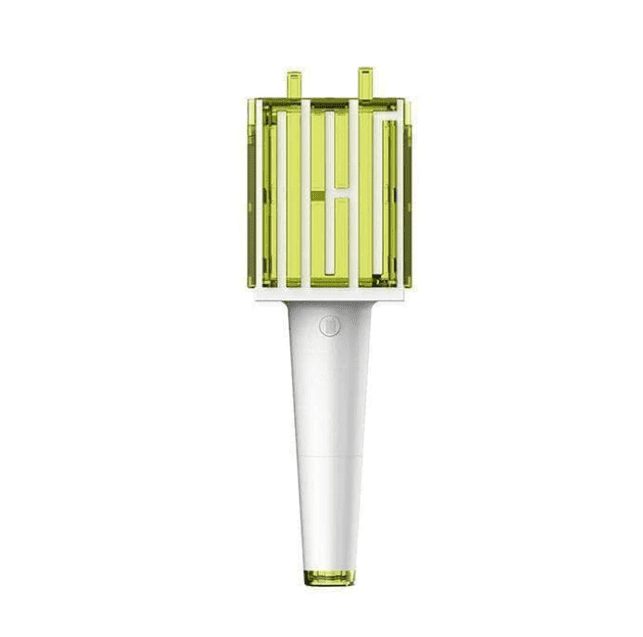 NCT’s lightstick was also revealed in mid-2018. It features the group’s name on the four-sided top and emits a green light. It is well made and very sturdy. The light is very bright, and the batteries seem to last forever. The light stick is also a great size and weight, making it easy to carry around.

This is important as NCT concerts will have the lightsticks flash to the beat of the music and change colors. It is all done via BlueTooth. Make sure the lightstick has two white sides and two green sides. Therefore, some fakes will have all four sides, green or white. 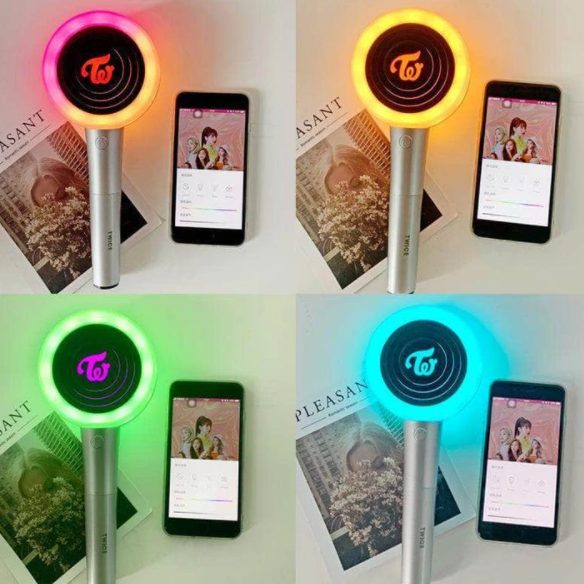 TWICE calls its lightstick “Candy Bong,” first released in 2016. It’s a significant upgrade from the previous version, with a sleeker design and improved functionality. The light is now more intense, and the color can be changed with a simple button click. The lightstick also comes with a handy lanyard, so you can take it wherever you go.

The design is based on their song “Candy Boy,” and it comes with a stand that allows it to be used as a mood light. It connects to their app, and you can control the lightstick’s brightness and colors when synced. In addition, it can be used to notify you of SMS messages. Remove the batteries when you are not using them, as they will run out quickly. 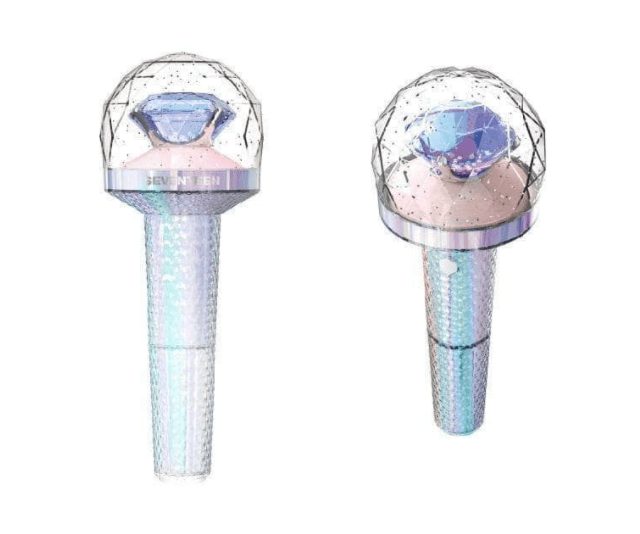 SEVENTEEN’s official lightstick was released in early 2017. It is called “Carat Bong” after their fandom CARATs. The lightstick is now made of durable plastic, so it won’t break if you drop it. Plus, it has a built-in rechargeable battery, so you don’t have to keep buying new batteries. The lightstick also features 17 LED lights that change color depending on the song playing. And, of course, it comes with a strap to wear around your neck or wrist.

It has SEVENTEEN’s official colors, rose quartz and serenity. The lightstick can be customized with a mini keyring set that looks like diamonds. It comes with a wrist strap and some customizable stickers. It is one of the most popular Kpop lightsticks around. Moreover, in the dark, it works very similarly to a flashlight. 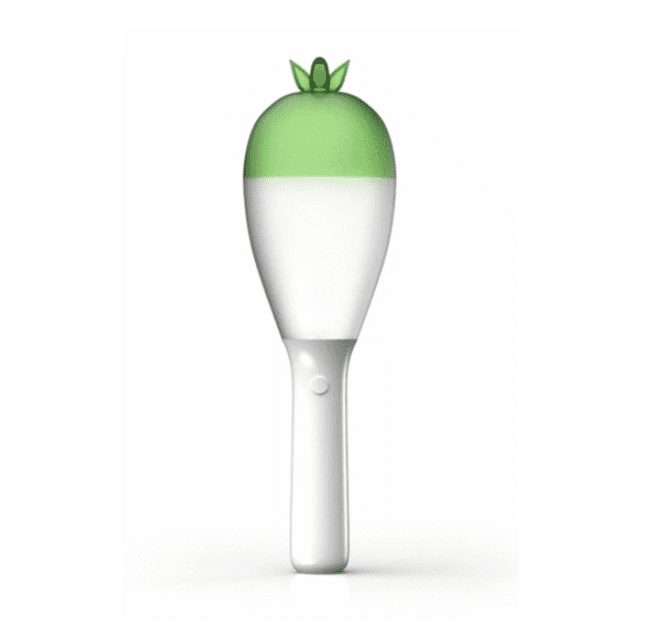 MAMAMOO’s lightstick is called MooMooBong. It is a radish-shaped lightstick and can produce 5 LED colors, is wirelessly controlled to emit 256 colors, and can vibrate. Yes, you heard me correctly; this lightstick vibrates. The design is sleek and modern, and the light is incredibly bright. The battery life is also impressive, and it takes just a few minutes to charge. In addition, it was specifically designed for disabled fans with eyesight and hearing impairments. 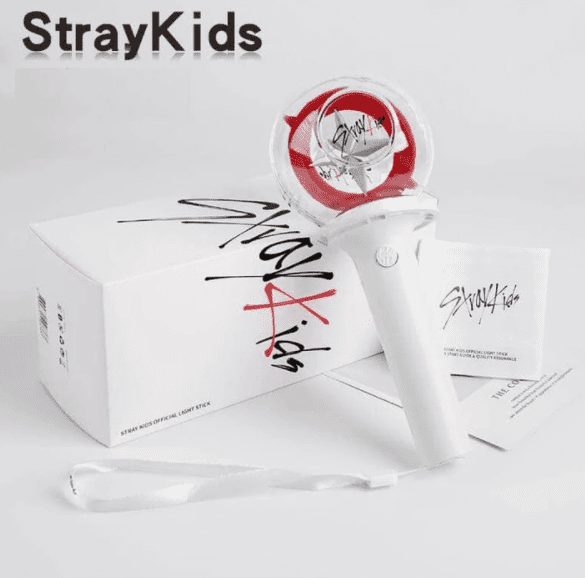 The Stray Kids lightsticks were revealed in late 2019. It has a moving red and silver compass. The red part of the compass has the phrase “You make Stray Kids stay” since their fandom is Stays. It has a white handle, a round button, and the Stray Kids logo. It is called Nachimbong, a combination of two Korean words for compass and rod. The lightstick can produce light in any color since it is equipped with an RGBW LED. It can be paired with your seat at the concert and connected to your smartphone via BlueTooth. In addition, it has three different modes (On, Blink, and Flicker).

The lightstick also comes with a strap, so you can wear it around your wrist or attach it to your bag. The batteries are also replaceable, so you don’t have to worry about running out of power during a concert. Overall, the Nachimbong is a great lightstick for any STRAY KIDS fan, and it’s sure to make your next concert experience even more enjoyable! 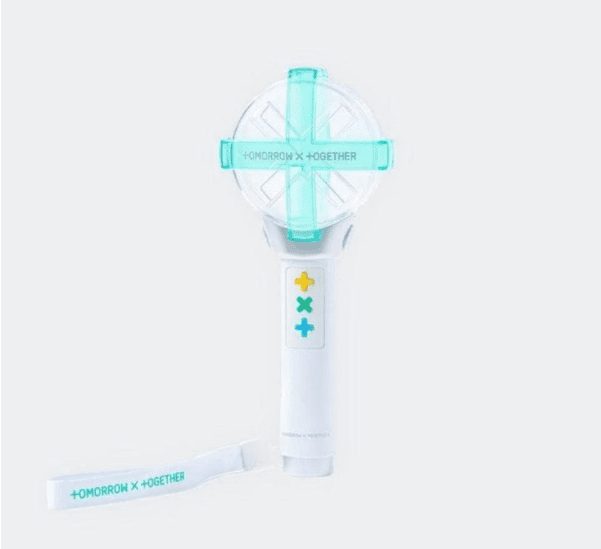 If you’re a fan of the k-pop group TXT, you’ll want to get your hands on their official lightstick. This handy little device not only lights up in different colors to show your support for the group but also has a built-in speaker so you can enjoy their music even more. The lightstick is also rechargeable, so you don’t have to worry about batteries running out. And if you’re worried about losing it in a crowd, the strap that comes with it will make sure it stays close at hand.

The TXT lightstick can connect to BlueTooth and be synced to their app. It also comes with photo cards! Make sure the buttons are the correct colors. For example, the first T should be yellow, and the X should be green. The final T should be light blue. It requires two AA batteries. Furthermore, when at the concert, connect using concert mode. 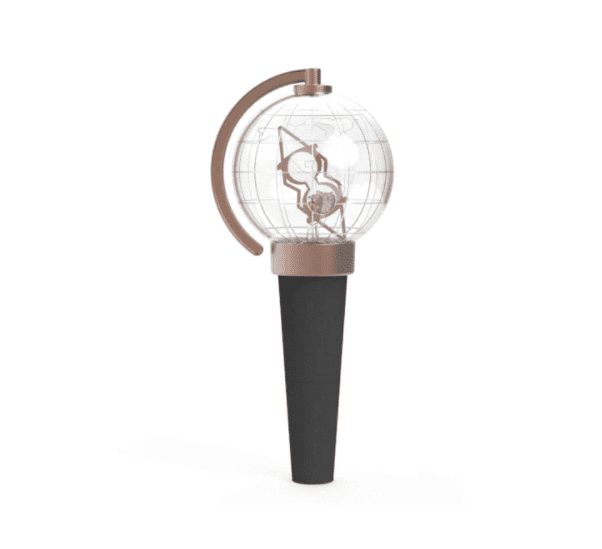 ATEEZ’s official lightstick is one of the most unique and stylish lightsticks I’ve ever seen. A treasure box inspires the design and even has a little key charm. The lightstick is also super bright, and the colors are gorgeous. It comes in a box that looks like a pirate’s treasure chest. The lightstick looks like a globe with a compass and hourglass inside it. It can be connected to your smartphone. Moreover, it comes with a strap and a user manual. One of the significant issues with this lightstick is that it does not come with photo cards. 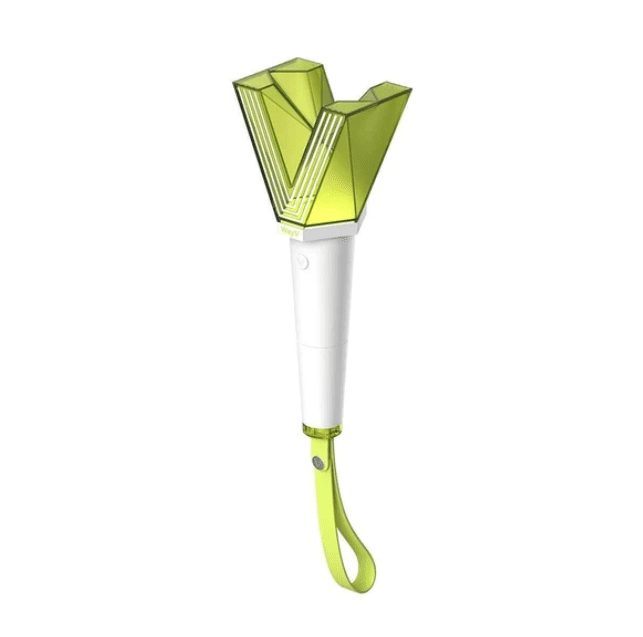 The WAYV Official Lightstick is an excellent addition to any fan’s collection. It’s well-made and looks great, with a sleek design that features the group’s logo. The lightstick has three modes: static, pulse, and strobe, and it also comes with a built-in speaker that plays sounds and music from the group’s albums. The lightstick is also rechargeable, so you don’t have to worry about buying batteries, and it comes with a carrying case for easy transport.

The Wayv lightstick comes with BlueTooth functionality and needs 3 AAA batteries. The design is meant to look like a V. Moreover, the color of the V is bright white and neon green. Therefore, it can light up the stadium in a neon green atmosphere. 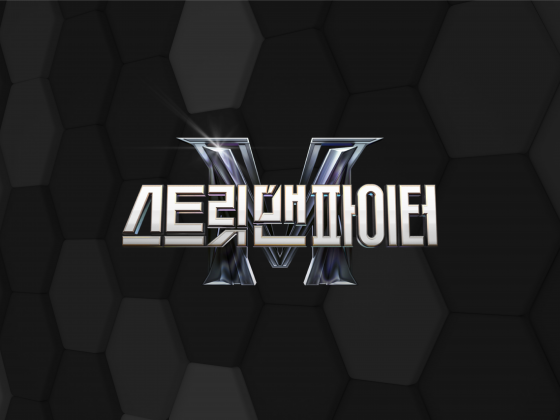