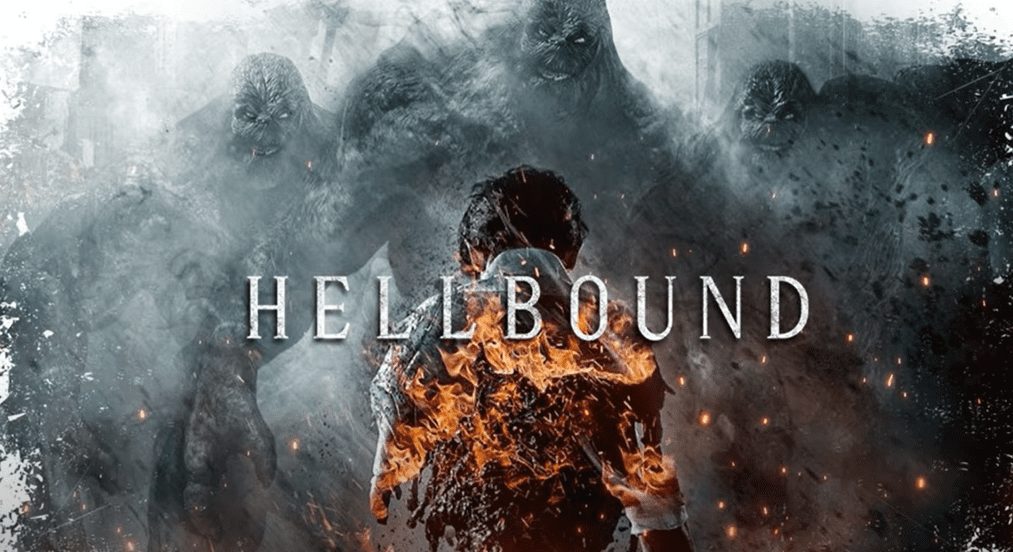 South Korea has done it again with another hit Netflix series called HellBound. SEOULSPACE decided to do a full Hellbound Season 1 recap, so if you have not seen the drama series yet, please do so before reading. This latest Korean drama on Netflix deals with religion, sin, and justice. It is a religious monster fantasy that asks serious questions regarding religion and humanity.  It replaced Squid Game as the most popular Netflix series on the first day of its release. The drama was written and directed by Yeon Sang-ho, who also wrote and directed the Korean movie Train to Busan.

HellBound is based on a Korean webtoon of the same name. It was co-created by cartoonist Gyu-seok Choi. Therefore, it already had a loyal following even before its Netflix release. It was even invited to the BFI London Film Festival and the Toronto International Film Festival and got positive reviews. With the success of Squid Game and now HellBound, South Korea is a force when it comes to drama series. Netflix viewers from around the world now have high expectations when it comes to Korean drama series.

The series begins at a small coffee shop as customers talk about whether an online video is real or not. The video shows a man that talks about an angel that appears to people and tells them the exact moment they will die and be sent to Hell. Then the video goes to 3 monsters killing a man. A man inside the coffee shop seems nervous as he looks at the time on his smartphone. Once the time hits 1:20, three monsters smash into the coffee shop and attack the man killing him and sending him to hell. Then the monsters enter a portal and disappear.

The police are investigating the case, and the death video has gone viral. One of the main characters is Jin Kyung-Hun, a police detective. Kyung Hun and his partner are assigned to investigate a religious cult called “The New Truth.” The New Truth was created by Chairman Jung Jin-soo 10 years ago. When the police detectives arrive at the crime scene, they see Jin-soo already there giving a speech about what happened to the man. He talks about other cases in Japan, and those decreed were all criminals. He stresses the importance of not sinning and living a righteous life.

Through a conversation between Jin-soo and Kyung Hun, it is revealed that Kyung Hun’s wife was murdered by a man who ended up serving a light sentence due to his drug use. Kyung Hun was left to take care of his daughter on his own.

Another character introduced is Park Jeong-ja who comes home to a surprise birthday party. As she blows out the candle, an Angel appears and tells her she will die in 5 days.

Another character introduced in Episode 1 is the leader of another religious cult called The Arrowhead, Skull Mask. These former followers of The New Truth are more radical and commit crimes against those who speak out against their cult. The next character introduced is Min Hye-jin, a lawyer from a law firm called Soto. She represents a man that members of The Arrowhead attacked. Hye-jin ends up meeting with Jeong-ja who shows a video of the Angel that her son recorded. She explains that The New Truth offered her $3 million to do a live broadcast of her death.

Jeong-ja hires the Soto Law Firm to ensure her family receives the $3 million from The New Truth once she dies. Hye-jin and her partners agree to represent her. Hye-jin, Kyung Hun, and Jin-soo all meet to sign the $3 million payment contract. During this meeting, it is revealed that Jeong-ja’s children are from separate fathers, piques the interest of Jin-soo, who is looking for the sin Jeong-ja committed. Skull Mask finds out about the live stream due to Kyung Hun’s partner, who is a devoted member of The Arrowhead.

The time for the execution live stream has come, and Jeong-ja gets ready in her apartment. The New Truth and The Arrowhead demand she confesses to her sins. People gather to witness her death.

Episode 3 starts where episode 2 left off. Jeong-ja is sitting in her chair, waiting for the monsters. The monsters arrive and kill Jeong-ja while everyone watches. Everyone at the execution bows down after the death of Jeong-ja. Later we see that no one wants to leave their house in fear of sinning. Hye-jin and her partner are the only ones that do not bow and are targeted by both cults. Her office was also vandalized and her partner was later assaulted. The Arrowhead followers also attack Hye-jin’s mother and are beaten to death.

Kyung Hun ends up finding out that his daughter is responsible for the death of his wife’s killer. Kyung Hun meets up with Jin-soo, who tells him he received a decree 20 years ago and is bound for Hell in 10 minutes. However, he states that he never committed a sin and did not know why he got the decree 20 years ago. This shows that the decrees are random and have nothing to do with people committing sins. Jin-soo states he kept this secret so people could live a more righteous life.

The only person who knew about Jin-soo secret was Pastor Jang Chil, who took Jin-soo’s place as the chairman of The New Truth after Jin-soo’s death. Once Hye-jin finds out the truth about both Jin-soo and Pastor Jang Chil, The Arrowheads attack her and leave her for dead. The monsters end up killing Jin-soo while Kyung Hun watches.

This episode jumps four years into the future. The New Truth has now become very powerful. They are now a big corporation with museums and even run ads. Chairman Jang Chil now runs The New Truth and publicly brands those who receive decrees as sinners.

A new character is introduced by TV producer Bae Young-jae. He is in charge of running a new ad for The New Truth, something he is not happy about. He has a wife So-hyun who is about to give birth to their first child. A nurse ends up recording a video of an Angel decreeing that the baby will die in 3 days.

Hye-jin now runs an organization called Soto. She has survived her attack by The Arrowheads. People with decrees come to Soto seeking protection from The New Truth and The Arrowhead.

Once Young-jae meets his wife, So-hyun, at the hospital, she shows him the video of the Angel.

Meanwhile, The New Truth has full control over the police and regularly executes live streams. Chairman Jang Chil overlooks the executions. Young-jae ends up seeking the help of the Soto organization and meets with a man named Hyun-joon. Hyun-joon explains that the decree has nothing to do with sin, and Jinsu spreads the lie. Meanwhile, Chairman Jang Chil discovers that Hye-jin is still alive and runs the Soto organization. He tells his deacon Yuji to find every member of Soto and bring them in. Yuji tells his partner SaSung to bring in The Arrowhead for their help.

Hye-jin meets with Young-jae and tells him she wants to do a live broadcast of his baby’s execution to show the world the truth. When he returns home he lets his wife know about Soto’s request. Yuji can find members of Soto and eventually kills Hyun-joon by burning him alive. He ends up tracking down Hye-jin, but she ends up escaping after beating him up. So-hyun takes her baby to The New Truth headquarters without telling Young-jae.

So-hyun texts Young-jae that she is at The New Truth to find out how it is possible her baby got a decree. Chairman Jang Chil orders the baby and So-hyun to be separated as this news can not reach the world. Young-jae with the help of Hye-jin ends up rescuing the baby. They hide out with the help of a man who also got a decree. The man helps them broadcast a video of the baby’s decree on the internet.  The man turns out to be Skull Mask and tells The New Truth about where they are. His execution is set to take place 5 minutes after the baby.

As more and more Soto members arrive, Skull Mask ends up killing them. Skull masks attack Young-jae and then later Hye-jin. So-hyun runs out with the baby, and a large crowd gathers. So-hyun explains what is about to happen to her baby. The monsters arrive, but the baby is saved by So-hyun and Young-jae who take the baby’s place. Five minutes later, Skull Mask is taken by the monsters. Hye-jin takes the baby as the baby represents the truth.

The final scene shows the remains of Park Jeong-ja in a museum. She is put back together and comes back alive!