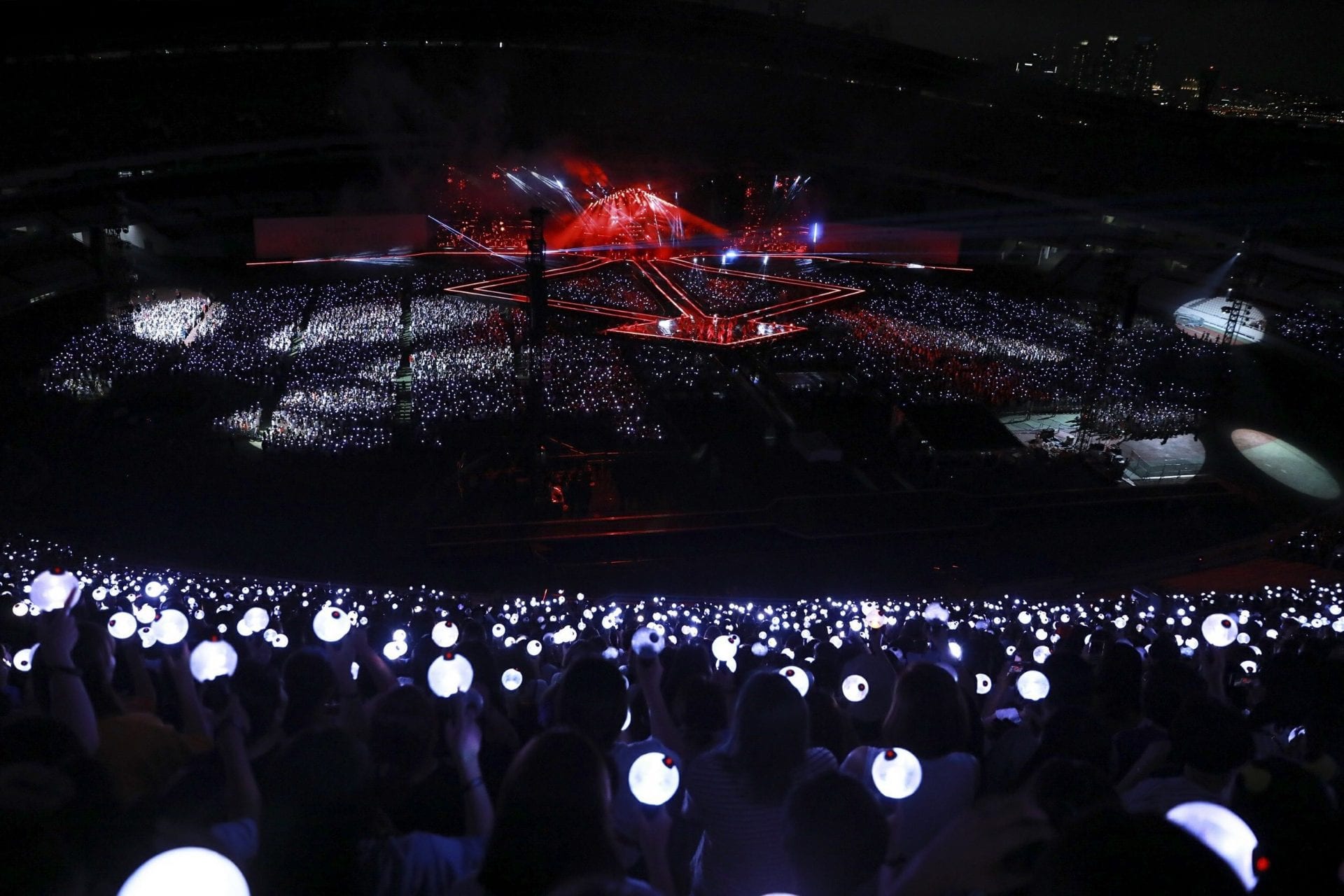 All Kpop concerts and tours have been canceled due to COVID-19. This means Kpop fans will not get to see their favorite Kpop groups live for quite some time. This includes fan “meet and greet” events. Fans can now only support their favorite Kpop groups via online or streaming channels. We are sure Kpop concerts and tours will come back and will be stronger than ever before. However, during this time Kpop entertainment companies will need to get creative to keep Kpop fans engaged. Once Kpop moves over to virtual tours, millions of fans from around the world will be putting on their VR headsets to see their favorite groups perform. Times are changing, and the Kpop industry will change as well.  Let’s look back at some of the biggest Kpop tours of all time.

The World Tour: Love Yourself by BTS is the biggest Kpop tour of all time. It was the 3rd worldwide tour by BTS and promoted their Love Yourself series. The tour began in August of 2018 and visited 12 countries such as South Korea, Japan, the United States, Canada, the UK, France, Netherlands, Germany, Taiwan, Hong Kong, Singapore, and Thailand.

There was a stadium extension to the tour called BTS World Tour Love Yourself Speak Yourself which began in Pasadena California in May of 2019 and finished in October 2019. In total, when combining Love Yourself and Speak Yourself, there were 62 concerts in 14 countries. When they performed in the UK, they sold out Wembley Stadium two times (120,000 tickets sold). In total, the tour brought in over 2 million attendees.

Big Bang’s biggest tour of all time was the Made World Tour is also one of the biggest Kpop tours of all time. This was their 2nd worldwide concert. The tour began in April 2015 and finished in March 2016. The tour visited an astonishing 15 countries, including China, Japan, South Korea, Australia, Mexico, and the United States, just to name a few. In total, the tour was attended by over 1.5 million fans. They did 66 shows which is still a record for the most shows by a Kpop group during a tour.

In addition to their live performances, the group also released a live album and DVD, both of which were hugely successful. The Kpop Tour Made World Tour was a truly monumental undertaking, and it cemented Big Bang’s reputation as one of the hottest acts in the world.

0.TO.10 was the 10th concert tour by Big Bang, and it celebrated its 10th anniversary. The tour included visits to Japan, South Korea, and Hong Kong. The tour started in July 2016 and lasted until January 2017. They held 24 concerts in 6 cities and sold over 1.1 million tickets.

During the tour, Big Bang performed a total of twenty-three songs, including hits like “Fantastic Baby,” “Bang Bang Bang,” and “Loser.” The group also held meet-and-greet events with fans in each city.

The tour was a huge success, helping to increase the popularity of Big Bang and K-pop in general in the Western world. It also grossed over $44 million, making it one of the highest-grossing tours of all time.

This was TVXQ’s biggest tour of all time. The tour began in November 2017 and lasted until January 2018. They brought in over 1 million fans from their 20 shows. The tour began in Seoul and concluded in Bangkok in. It consisted of 27 shows in total, including stops in Hong Kong, Taiwan, China, Japan, Malaysia, Singapore, Philippines, and Thailand. The tour was a huge success, drawing over 550,000 fans from all over Asia. TVXQ’s “Begin Again Tour” was a historic moment for the group.

This was TVXQ’s 2nd biggest tour. It was for their 6th album “Time”. The tour took place in Japan and took place in 5 major concert domes. This included the Nissan Stadium, which is Japan’s largest seated stadium. They did 18 shows and sold over 890,000 tickets.

The 5th concert tour by Big Bang was their 3rd biggest. The Alive Tour spanned 4 continents (Asia, North America, South America, and Europe. The tour started in March 2012 and finished in January 2013. During this time, they performed in 48 shows, with 41 taking place in Asia. The tour sold over 800,000 tickets and played a major role in bringing Big Bang to the global audience.

The Japan Dome Tour was the 4th concert tour by Big Bang in Japan. The tour went to Japan’s six major concert domes. This tour started in November 2013 and finished in January 2014. The tour was only held in Japan and involved 16 shows. Big Bang was able to sell over 770,000 tickets for this massive tour.

The “Last Dance” Tour was the 6th concert tour in Japan by Big Bang. The tour started in November 2017 and lasted until December 31, 2017. The final concert was held in Seoul. This tour did not have T.O.P., who was doing his mandatory military service which started in 2017. Despite this, the tour brought in over 760,000 fans during a 16-show tour.

The “With” Tour was one of the biggest tours in Japan. It was to support their 8th Japanese studio album With. It was also to celebrate TVXQ’s 10th anniversary in Japan. The tour went from February 2015 to April 2015. They brought over 750,000 fans to only 16 shows in Japan. The tour was a huge success because fans knew that this would be their last tour before going into their mandatory military service.

The largest tour by EXO was from March 2015 to March 2016. It was a year-long tour that saw them perform in 12 countries and in 25 cities. These cities included 20 in Asia and 5 in the United States. The tour set a world record by selling out all 5 days in less than a second. The tour saw them perform their three famous albums Exodus, Love Me Right, and Sing for You. In total, the tour brought in over 740,000 fans. In addition, EXO concerts showcase some of the best Kpop fandom lightstick shows of all time.